The Falcon 9’s first stage was making its second launch following a prior liftoff and landing in July. After stage separation, it successfully landed on "Of Course I Still Love You", SpaceX’s droneship stationed about 400 miles offshore in the Atlantic Ocean. Several days later it arrived at Port Canaveral aboard the drone ship. 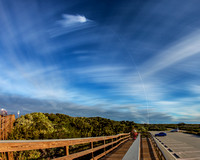