This was the tenth launch and landing of this Falcon 9 stage booster, which previously supported launch of Crew Demo-2, ANASIS-II, CRS-21, Transporter-1, and five Starlink missions.

On board this launch were 105 commercial and government spacecraft (including CubeSats, microsats, PocketQubes, and orbital transfer vehicles).

Launch photos taken from SR 528 causeway, about 11.5 miles away with landing photos from about 8.5 miles.
© Dennis Huff 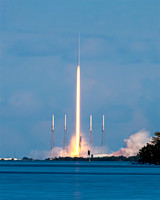