The largest of the Delta 4 family, the Heavy version features three Common Booster Cores mounted together to form a triple-body rocket. The Parker Solar Probe is the first-ever mission to “touch” the sun. The spacecraft will travel directly into the sun’s atmosphere about 4 million miles from the sun's surface on a seven-year mission, with repeated trips through the star’s blazing outer atmosphere.

Photos taken from NASA Causeway, about 3 miles away.
© Dennis Huff 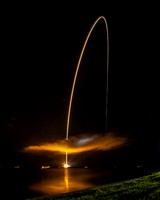