On Thursday, November 11 at approximately 6:33 p.m. EST, 23:33 UTC, Dragon will autonomously dock with the space station. On its flight to the International Space Station, Dragon executed a series of burns that positioned the vehicle progressively closer to the station before it executed final docking maneuvers, followed by pressurization of the vestibule, hatch opening, and crew ingress."

Photos taken from SR 528 causeway, about 14 miles away.
© Dennis Huff 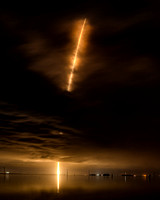