Following stage separation, SpaceX Falcon 9’s first stage landed on the “Of Course I Still Love You” droneship, which was stationed in the Atlantic Ocean. 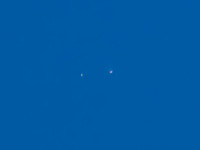