Both halves of the Falcon 9 rocket payload fairing were caught using nets on-board SpaceX's two recovery ships "Ms. Chief" and "Ms. Tree" in the Atlantic Ocean. This is the first time both halves of the fairing have been recovered on the same mission. 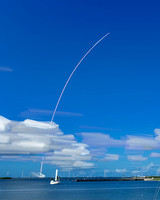