SpaceX and NASA are targeting no earlier than Wednesday, April 27 for Falcon 9's launch of Crew-4, Dragon’s fourth science expedition mission to the international Space Station, from Launch Complex 39A (LC-39A) at NASA’s Kennedy Space Center in Florida. Launch is targeted for 3:52 a.m. ET (7:52 UTC).

This will be the first flight of the Dragon spacecraft supporting this mission and the fourth flight for Falcon 9's First stage booster, which previously launched CRS-22, Crew-3, and Turksat 5B.

Following stage separation, Falcon 9's first stage will land on the A Shortfall of Gravitas droneship stationed in the Atlantic Ocean.

During their time at the orbiting laboratory, the Crew-4 astronauts will conduct over 200 science experiments in areas such as materials science, health technologies, and plant science to prepare for human exploration beyond low-Earth orbit and benefit life on Earth.

Photos taken from Titusville, about 12 miles away.
© Dennis Huff 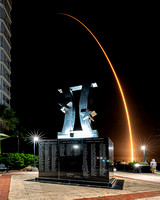