An upgraded version of SpaceX’s Dragon cargo freighter launched Sunday from the Kennedy Space Center in Florida, loaded with 3.2 tons of supplies and experiments in the first of at least nine resupply flights to the International Space Station under a new NASA contract. The second-generation Dragon supply ship is based on SpaceX’s Crew Dragon vehicle designed to fly with astronauts.

The Cargo Dragon spacecraft is loaded with 6,553 pounds (2,972 kilograms) of equipment and research hardware, including a new commercial airlock developed and owned by Nanoracks for attachment to the space station. There are also fresh food packages and provisions on-board for the space station’s seven-person crew.

Photos taken from Playalinda Beach, about 4 miles away.
© Dennis Huff 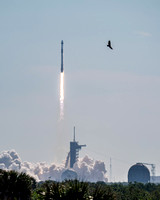