Atop Falcon is the Dragon spacecraft with more than 5,000 pounds of supplies and equipment for the space station.

The first stage executed a series of maneuvers after separation, in an attempt to land atop a floating platform off the coast of Florida. It's been reported the stage did reach the platform, but was destroyed due to a hard landing. First stage can be seen descending in photo #7.

Jupiter and the Moon were also on display! 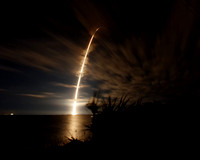